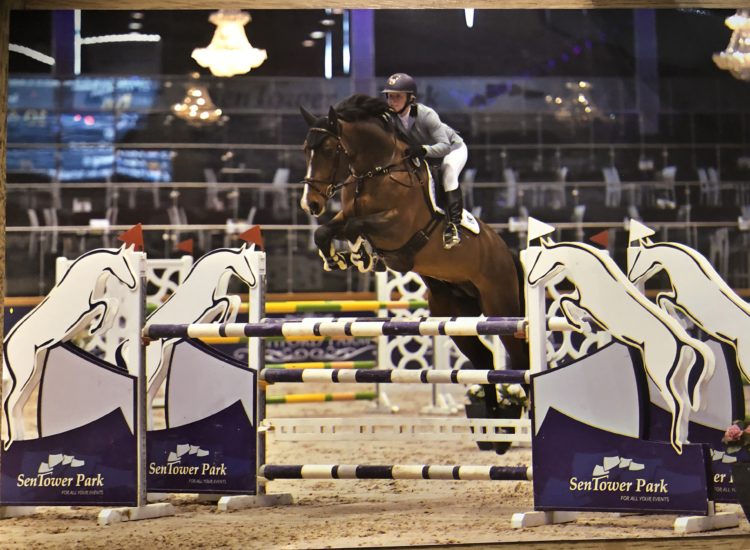 My original plan was to take Dakota, History and Ascon Z. However Dakota had only been to one show since coming back from time out. With that in mind, plus the travelling and three days of jumping, we decided it would be too much and reluctantly I withdrew him.

However it was the best decision.

On Tuesday the 29th the lorry was packed .We set off early due to the fact it was snowing and the forecast was not good in Belgium.

Why is it that you think you’re totally organised and still things don’t go to plan!?!?

We were advised to catch the 11pm ferry as we were warned that winds were increasing. We arrived at the port in plenty of time – 1015pm only to be told the ferry was full and we’d have to wait for the one at 1am! ! Typical.

The time dragged to say the least.

The ferry crossing to Calais went smoothly (phew!). The roads were pretty much clear the other side of the Channel and we arrived in good time at the show for about 930 am on the Wednesday.

Once the horses were settled we went to have a look around. wow ,what an amazing place . The main arena was huge as was the warm up arena. Both arena’s were temperature controlled. So for the weather that we were having it was a god send. The cafe/bar ran down the middle, between the arenas. It was built out of glass panels, a bit like a conservatory, so it meant you could watch both sides- the ring as well as the warm up. What a brilliant idea.

After I had found my way round I got on the horses to give them a leg stretch. They ran a training class on the first day which allowed the horses to see the arena. It was a good opportunity to get Ascon in the ring as it was very spooky, before the his class the following day.

I started the show off with an unlucky four faults on both Ascon and History. They were a bit star struck by the lovely arenas. However day 2 ,and Ascon was well on form jumping into the lead in the CSI** 130. He jumped incredibly. Our lead stayed until the last horse. A rider from Portugal rode a brilliant round to knock me out of top spot .

I was thrilled with Ascon (Snoopy). I hadn’t gone to Belgium expecting to be anywhere near the top 3 places let alone coming second. He couldn’t of made me more proud.

The next day History (Hamish) was in the CSI*YH where he produced a lovely double clear in the 7 year olds. Both the horses jumped some fantastic rounds over the weekend, so we came back buzzing. We met some lovely people and had a good laugh.

I will definitely go back and my plan will be to go and do a few more international shows this season.