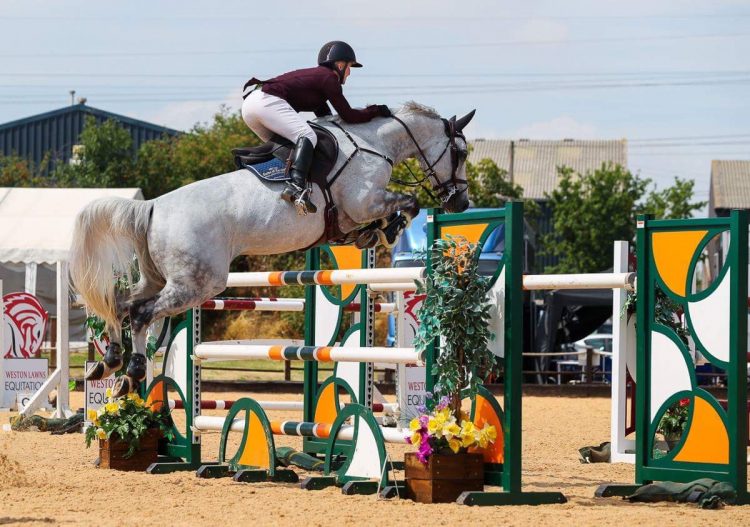 Keysoe CSI** was a great show for us. We took three horses and they jumped fantastic rounds all week. The main highlight of the show was the finals. Both Dakota and History jumped into the CSIYH*  6 yr old Final. Dakota jumped two lovely double clears on the first two days coming equal first both days. In the final he just made a couple of green mistakes. However History excelled himself.  He jumped an amazing DC in the final and came 5th. This was a major achievement for him as just a year ago he wouldn’t have coped with the atmosphere. This year he has grown up a lot, and has gained more confidence in both himself and in me. I made a decision last year to hold him back and produce him a bit slower. By keeping him within his comfort zone, enabling him to find the course easy, he has gained in confidence and bravery. My patience is now paying off and he’s taking the fences on and just keeps improving. The 6yr old final was his biggest course to date. I couldn’t be happier with him.

I also decided to take Ascon Z who had been with Jay Halim since my injury. Keysoe CSI ** was our first show back together. On the first day he jumped a lovely double clear and was placed, which I was over the moon with. Having had such a long time off from riding him it was great to have a few days competing to get our confidence back as a partnership. On the last day in the final I felt ready to give it our best shot. It was a speed class. I jumped the last fence to hear that I had gone into the lead. I was so so happy that I got off and gave my mum the biggest hug ! However it wasn’t to be this time. One of the last riders went in and pipped me at the post. So Near and yet so far! I had to settle for second, but to be honest I couldn’t of been happier with both of our performances.

After the roller coaster ride of emotions at Keysoe I felt I was on a roll. I wanted to try and focus on getting History qualified for the Nationals at Stonleigh. I felt so much more confident in him and his ability so wanted to step him up. I had already qualified Ascon and Dakota so my next aim was to get History there.

So we sat down and made a plan. However we then realised there was only one qualifier left at Codham Park Equestrian.

To my delight History and I were on form. We were one of only three treble clears that came equal first to qualify! I was thrilled.

The next Show was Weston Lawns Young Horse Show, this was a four day show. Because of the amount of jumping both the 6 year olds had done lately, I wanted to keep their classes to a minimum as they both have a very busy month to come. I knew I had to jump a double clear to qualify for the final on Sunday. I’d decided that if they jumped a double clear on the first day then I would save them for the final and not jump again for the rest of the show. This worked out, both horses managed to qualify on the first day, so they had the rest of the time hacking or I worked on the flat to keep them loose and soft for the final on the last day.

Ascon also came to Weston Lawns. Because he is due to jump at the Nationals, I really wanted to step him back up at this show so we’d feel ready. The first day was so annoying for me as I jumped the 130 to come home with the second fastest time but had a really unlucky fence – I was gutted! However on the second day I decided I wanted to step back up to the 140. So tentatively I entered the Weston Lawns 140 Grand Prix. When the course was being built I was so nervous as I thought it looked huge. I was excited to be jumping it, however I was nervous because I didn’t think I was quite ready for it.

Once I got on I didn’t give it another thought, I focused on keeping Ascon as calm as I could and keeping him relaxed. Ascon is a very sensitive horse, he feels exactly what I am feeling so for him I had to try my best to feel calm and confident. When the bell rang I just focused on my course and the plan I had in my head. I was over the moon with the result. We jumped round for just one down in the last line. I was so happy with him, I hadn’t dreamed we would get round with just a single fence. I was so proud of him. He’s such an amazing horse.

The next day was the 6yr old final. History yet again was super consistent and jumped round to come 7th in a very quick and competitive final. I’m so pleased with the way the horses are going. Roll on the next show.

« Hickstead The Highs and Lows of Showjumping »