Fantastic shows and yet another lockdown !! 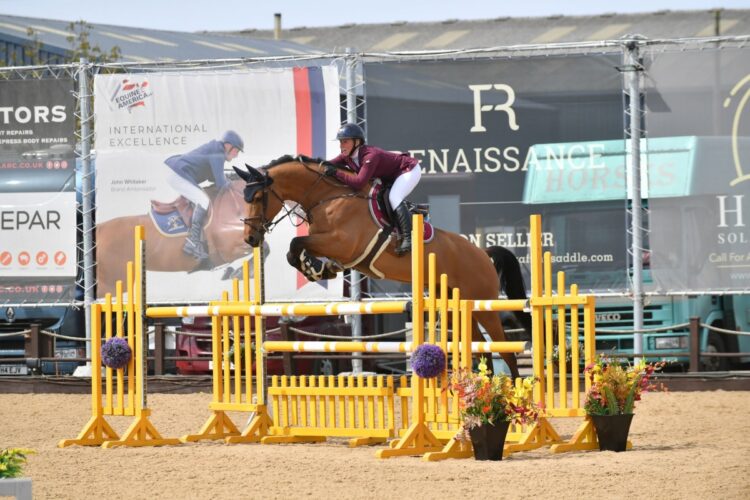 A lot has happened since my last blog … we ended up in yet another lockdown ! Luckily I managed to get one final show in before the shows were cancelled. On the 5th of December I went to Onley Grounds Equestrian. I only took 2 horses; Jabrun and History. They both jumped mega, it was a brilliant show to end on before we were all back to home training! I had thought it was a terrific start of the indoor season, little did I realise that none of us would have much of an indoor season! Jabrun jumped a fantastic clear in the newcomers, it was a massive step for him, he’s so big and weak he’d been really struggling jumping out of doubles or combinations.

He jumped so big going in that he didn’t have the strength to jump out. So this was a major achievement for me and showed that my training was paying off.

I was jumping History in the evenings Grand Prix. We expected it to be a late class but we ended up jumping a whole lot later than we’d hoped. Luckily I had been organised and had booked stables, I’m not keen on the horses standing on the lorry for that length of time. The class kicked off around 9pm. I was so thrilled with History, he jumped the most incredible clear and we went through to the jump off. At the time there was only about 4 clears so I was ecstatic ! He jumped incredible, I came out and literally rang everyone, most of which were sleeping!

I then had the jump off to get ready for, again History produced another brilliant clear. We came 6th which I was so proud of, I felt like I had won the class going double clear – he’s such a dude.

The drive home was a long one, not only because it was so late but because my adrenaline was still pumping! I think we got home around 1 in the morning, however it didn’t matter, I was so thrilled with both the horses achievements that I could have kept going!

After Onley (due to lockdown), we didn’t really get an awful lot done, just went back to training. We started getting  the 4 yr olds; Astwick’s First Chance and Zirocco van de eijkhof ready for the shows to open back up, which happened in late April !

Our first show back was a fantastic one. Jabrun came out firing on all cylinders. The home training really gave us time to strengthen him up. He jumped a couple more newcomers clear then went straight into his first fox with a clear. He really has come on in leaps and bounds, as he gains strength he’s finding things a lot easier and is really improving his shape and the consistency.

Both 4 year olds produced clear rounds at their first shows. Astwick’s First Chance jumped super in a 4yr old class at Weston Lawns, where he was snapped up! Zirrocco van de eijkhof took a little longer to get out to a show but first show out he posted not only double clear but came second !

After the government started relaxing things a bit more, AASE booked a training camp for a couple of days which was really beneficial. I took two horses; Jabrun and Cornet Royale. This was Cornet Royale’s first real outing and she didn’t put a foot wrong, showing off her potential. I really learnt a lot at the camp, from my lessons on the horses with Andrew Saywell, right through to my strength and condition ! I couldn’t recommend this course enough.

Whilst things where opening up we had more exciting news, we had a lovely new groom join the team from Ireland called Ciara! She brings with her a lot of fun but also pure dedication to the horses. This is lovely to see and I’m looking forward to our journey together.

Not only a new groom arriving but we have some super horses arriving from Gugler Sport Horses. Three five year olds – all of them are just pure quality and I feel so privileged to have the opportunity to produce such top class horses !

So now things are opening up we have so much to look forward to, from a new member of staff to a new team of horses, I will look forward to getting some photos and introducing them to everyone!

Watch this space to see these new superstars of the future.

« Lockdown 3 or 4 I’ve lost count ! Some new prospects and starting to move indoors for the winter season! »