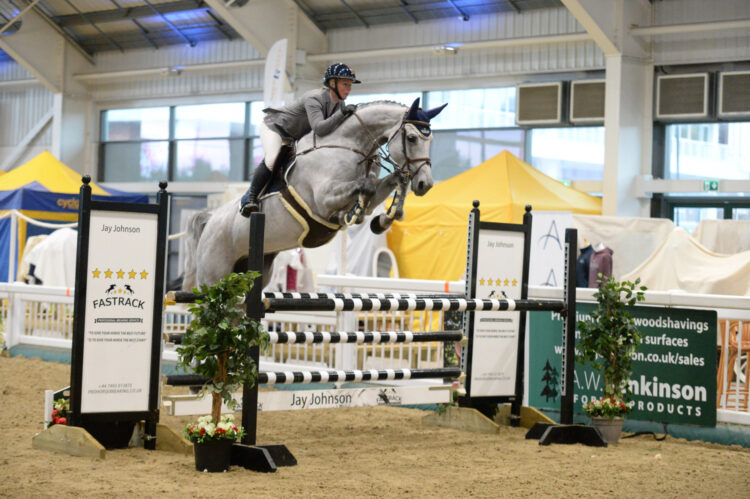 It’s been a while since my last blog. Here’s my attempt at an update on the horses progress:

I’d planned to keep the jumps small for the younger ones to reinforce their confidence, then build them up to jump the Winter Novice on the last day.

This was a step up for both Aurora and Elsa, it was a 110 class and an A10, (in A10 classes the second half of the course is bigger and there is a separate jump off). I didn’t enter the class to try and qualify but to use it to step them up a height gradually.

Aurora jumped a fantastic round on the first day however she made a green mistake which cost her a fence. However, on day 2 she was amazing and jumped a beautiful clear round.

Elsa was brilliant and jumped clear both days. Her rideability improved each day.

On the last day we jumped the Winter Novice and I was thrilled, both horses were clear and into the jump off! I was over the moon with them; 60 in the class, approx 20 in the jump off, and two of those were mine ! Often when competing in these classes I consider what the purpose is, is it to go for a win or give the horse experience. There will always be more experienced horses in the class and when you’re riding a youngster it’s important to get the foundations solid. With this is mind I went for two steady clears.

With Dodger I decided to change his bridle so only jumped a couple of the foxhunter classes.

He jumped mega although on the first day he made a green mistake which resulted in a rail down. On day two it was me that made an error, in the jump off! Unfortunately I got too close to a fence and gained another four faults! I was so disappointed with myself, (dodger deserved a clear!).

However it’s important to take the positives away from both rounds. I felt they were more balanced and controlled than they were at Arena in September. My plan is to continue with the new bridle and hopefully when we are both used to it, we will jump clear rounds !

History’s trip to Aintree didn’t go to plan ! As mentioned in my last blog; after such a fantastic round in the Grand Prix at Arena Uk I was going to jump the GP at Aintree.

On the first day I jumped him in the Grade B which was 130 – i do this to get him in the ring and to keep it easy, he jumped mega, a beautiful clear round. On the second day my plan was to jump the 140.

On the schedule it was an A10 but I had thought it would give me some idea how the GP was going to be built. I thought that because it was on the second day it wouldn’t be too strong and they would use it as a warm up for the GP. However, after walking the course I realised it may as well have been the GP – it was huge with some very technical lines! After consulting with my mother and trainer we decided to withdraw him as both myself and History were not quite prepared for a course like this on the second day. This meant that I would also not jump the GP as I didn’t want to go straight into a 145 cms class.

Instead I sat and watch from the sidelines.

It was a large class of approx 80 starters. Proving how tricky it was there were only 6 clear rounds, the competitors that jumped a clear round, did it spot on and it was a pleasure to watch. There were 28 riders that did not compete ( retired/eliminated or fallers).

It was gutting for me as I was really keen to have another crack at a bigger class. Having said that I’m so pleased that I made the decision to save him for another day.

Im raring to have another go at the next show!

Having looked at the schedule for Keysoe Winter Classic I have entered in the 135 A10 class (as this will be more like a nice 140) on day 2 rather than the 140 A10 that is also scheduled.

Fingers crossed this will be a good plan and will keep us both confident to jump another indoor GP in my keen bid to step us up for my end goal …hopefully we aren’t too far away… which is to jump a World Rankings Class at an international show.

After Aintree it was back to practicing !! Luckily we had Haddon Training AASE camp on at Arena Uk. This is brilliant as not only do we learn about everything to do with our sport ( nutrition, psychology, communication etc) we have some of the top trainers on the program to help us.

I took a few young horses and had two amazing days of training. I had Andrew Saywell helping me with the jumping. He really helped me to iron out a lot of problems, he worked very hard on distances and getting the horses to land and wait. This was perfect for me as all my horses have lots of power, jump and stride which I struggle to contain !

I was also lucky to have some sessions with dressage trainer Heike Holstein. In my lessons she really helped me to get the horses relaxed and stretching over their backs.

It took a while but I will continue practicing, it really helped as all the horses are a little tense in their way of going. Heike has given me exercises to practice and ones I will work hard with as it’s really going to improve my horses in the long run!

I found the whole camp really beneficial, I will take all the information away with me  and use it to take me to the next level!

« Some new prospects and starting to move indoors for the winter season! Keysoe Winter Classic and CSI show. »